Building upon the initial update from the August 9, 2016 Joint Session, LINK Strategic Partners began an internal audit process with the City of Falls Church Council and School Board members to best understand key contexts and considerations for a process of any kind to move forward.

Themes from these stakeholder audits – primarily information, structure, and timing – were presented in a joint session on October 3, 2016. The process needed clear, comprehensive, and data-supported information; structure for decision-making to move the process forward; and consideration of timing for long-term planning, development, and key milestones.

These themes led to the development of process concepts that structured and ordered the phases of decision making. After determining structure, the process splits fact-finding into School Board questions and City Council questions. After the factual foundation is established, the process moves into goal setting and additional studies, Requests for Proposals (RFPs), or program considerations needed to move the process to implementation.

On November 1, 2016 in joint session, the preliminary roadmap was agreed upon and a working group put in place to assist staff in data aggregation and dissemination. The group consists of two City Council members (Letty Hardi and Marybeth Connelly); two School Board members (John Lawrence and Erin Gill); and staff members from the city and school system. Meetings of the working group have been posted, public meetings.

The factual foundation began on November 21, 2016 with a presentation of Falls Church City Public Schools (FCCPS) data. The intended capacity of George Mason High School (GMHS) was 780 students, but capacity was expanded by converting lab and conference space to classrooms to accommodate a current capacity of 876 students. Capacity can refer to both physical infrastructures that cannot expand (like gymnasium, auditorium, bathrooms, hallways, etc.) as well as student capacity, a more flexible number based on classrooms, planning blocks, and educational programming. This second definition explains how a capacity of 1,200 students could "flex" to a capacity of 1,500 by adjusting teacher planning blocks and changing the educational program so teachers share rooms rather than keeping their own.

Current enrollment at GMHS is 817 students; this number was reported on September 30, 2016 and typically fluctuates over the course of the school year. This fluctuation is usually a small percentage of the total population (by less than 1%). Enrollment of 817 includes out-placed students, of which there are currently 26 total across all grade levels.

Enrollment projections include historic overviews since 2006 and forecasts out to School Year 2031-2032. Prior to 2011, projection models were done internally by FCCPS staff, Hunter Kimble; since 2011, data and population experts Weldon Cooper have done the projections. Growth numbers have averaged 3.7% of the last 10 years and 4.29% over the last 5 years. GMHS enrollment is expected to exceed 1,200 students around the year 2028, and exceed 1,350 by the year 2032.

In addition to student numbers, the FCCPS fact-finding evaluated current facility conditions as well. Based on Capital Improvements Program (CIP) numbers with cost breakdowns for new equipment, as well as a memo for context from the FCCPS Director of Facilities, the current status of GMHS is noted to be outdated and unreliable, with a majority of its critical equipment outlasting the national recommended standards and anticipated replacement dates.

The City Council fact-finding was presented on December 5, 2016 to the joint session regarding financial possibilities and affordability for a new project. Under current financial policies, the City's debt capacity is approximately $70 million for all projects, or about $40 million for the GMHS project. Using alternative modeling scenarios and policies, the city could afford larger projects by using capital reserves to pay down the debt service, potentially receiving money from property transfer (lease or sale) and economic development, and assuming a longer (30 year) debt payout. In addition to financial models, City staff compared these debt projections against neighboring jurisdictions for comparison, as well as providing explanations of Tax Increment Financing (TIF) and Community Development Authority (CDA).

One exercise of the School Board fact-finding was to produce distinct tiers describing to what extent FCCPS could address capacity and facility-condition needs across a spectrum of funding options. The Working Group proceeded with due diligence to evaluate a spectrum of Discussion Options based on round, square-foot numbers and cost estimates from Arcardis, along with comparisons to similar projects like George Marshall High School, nearby in Fairfax County. On January 3, 2017, the Working Group presented to the joint session a series of initial discussion options.

The Working Group established three tiers for the project:

Each tier produced a number of baseline options based on the initial fact-finding exercises, and many options had sub-options to capture the extent of low, middle, and high levels of renovation. Considerations and trade-offs during the option development discussions revolved around:

This document highlights the options which grew out of additional questions and refinements, forming many similar-but-nuanced "what if" scenarios with slightly different tweaks. As a spectrum, these discussion options were modeled on similar inputs and best used comparatively to assess pathways to a facility solution; additional feasibility studies would be required to more accurately understand specific pricing for each one.

The following options were developed based on the needs and program identified in the last Public-Private Educational Facilities Infrastructure Act (PPEA) process, including an addition to Mary Ellen Henderson Middle School and space for central office use. Numbers and estimates will shift as more clarity and refinement is provided for the school programming in the "Goals" phase of this roadmap.

Following the fact-finding and options development, the City Council and School Board will continue along the process roadmap with goal-setting. Using the base of information gathered and community feedback from the Community Meeting on February 4, 2017, they will refine the goals and program and move forward with the site vision through small area planning, the issuance of an Request for Proposals (RFP) or design competition, and additional processes that will further clarify next steps forward for the City of Falls Church community, school system, and City alike. 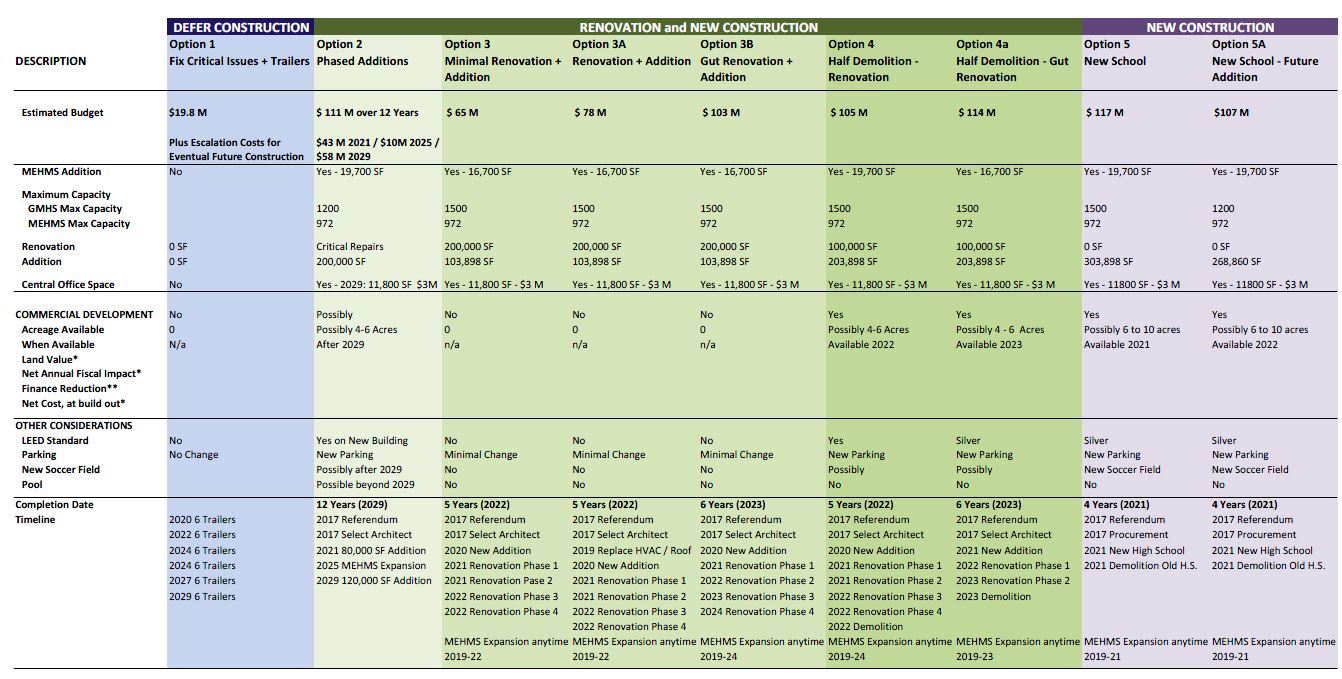