The first of two new pipes were installed underneath portions of the W&OD Trail (in conjunction with the Dual Trails widening project) in June 2021. The second phase is underway where the project will be completed with new culvert installed and pipe lining performed to the junction with Four Mile Run.

The Trammel Branch watershed outfalls through a stream that touches Great Falls Street, West Columbia Street, and Shadow Walk, which drains through a single culvert (pipe) near the W&OD Trail then into Four Mile Run. During heavy rains, water from the surcharged Four Mile Run flows backward into the culvert in an upstream direction. This means runoff coming naturally downstream has no place to go, which causes severe ponding and yard flooding near the culvert/trail. Many homes along the Trammel Branch have experienced serious flooding in recent years, including sanitary sewer backups.

There are two phases to the Trammel Branch Stormwater project. The first phase is placing a new pipe (that runs parallel to the existing pipe) underneath the W&OD Trail. This additional pipe will mean additional outflow capacity into Four Mile Run, which should help alleviate excess water from pooling in the yards of nearby homes. Phase Two will replace the older pipe with a larger one with increased capacity and possibly an additional culvert replacement.

In 2020, the Stormwater Task Force identified the Trammel Branch as one of six priority projects due to the severity of flood damage, the number of affected homes, and the risk of sanitary sewer backups. 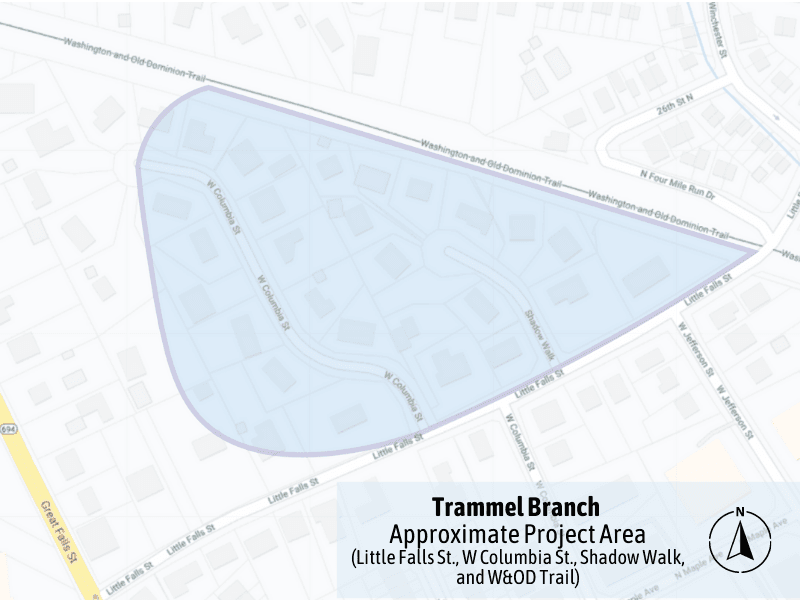 The project is estimated to cost $1,870,000, with the majority of funds coming from the Stormwater Utility Fund.