In September 2020, the City began construction to upgrade South Washington Street and Hillwood Avenue, and provide needed improvements to the intersection of those two streets.

A contract has been awarded to Fort Myer Construction and work is expected to take about one year.


In a 2008 study, funded by a grant from the Council of Governments (COG), the need and viability for transportation improvements along the S Washington St. corridor were assessed. The goals of this study were to: The study concluded that there were definite needs for improvement along this corridor. Working in conjunction with VDOT and Fairfax County, City staff have generated a comprehensive plan to address the additional deficiencies. Input garnered at community meetings held earlier in 2013 was taken into consideration, and the current plan reflects that feedback. 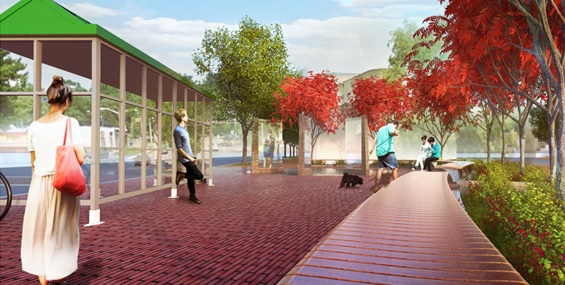 The following streetscape improvements are planned:

$2.7 million in federal and state funds were designated for an Intermodal Transit Plaza, whose construction is bound by federal milestone dates.

This multimodal project is funded through a combination of grant funds from the Federal Transit Administration, Virginia Department of Rail and Public Transportation, Northern Virginia Transportation Authority, and Six-Year Improvement Program/Urban funds.


Any questions related to this project, please contact Susan Long at 571-651-0133 or slong@fallschurchva.gov.
[]